[Interviews] DIGITAL Hearts finally started the service to against the VR sickness. What does scoring sickness reveals to you?

DIGITAL Hearts provides the debugging services to detect malfunctions through performance test primarily on video games, mobile contents, and amusement equipment from the perspective of the end user. The company offers the high quality assurance and supports the product development of the client.

As 2016 is known as the first year of VR, a number of the head mount display (HMD) has been commercialized, including HTC Vive, Oculus, and PlayStation®VR (PSVR), which is scheduled for release in October 2016 by Sony Interactive Entertainment. In response to this, a variety of VR contents have also been released for gaming platforms on a daily basis, regardless of whether they are major or private company.

In August 2016, DIGITAL Hearts announced that they started to provide a new VR Sickness Scoring Service which enable to quantify experience of the sickness.

While their service begins, Social VR Info has the interview with Shinji Yamashina, Vice Manager of Business at DIGITAL Hearts, and asked about the development process of the service, testing procedures, and the situation after starting actual operations. 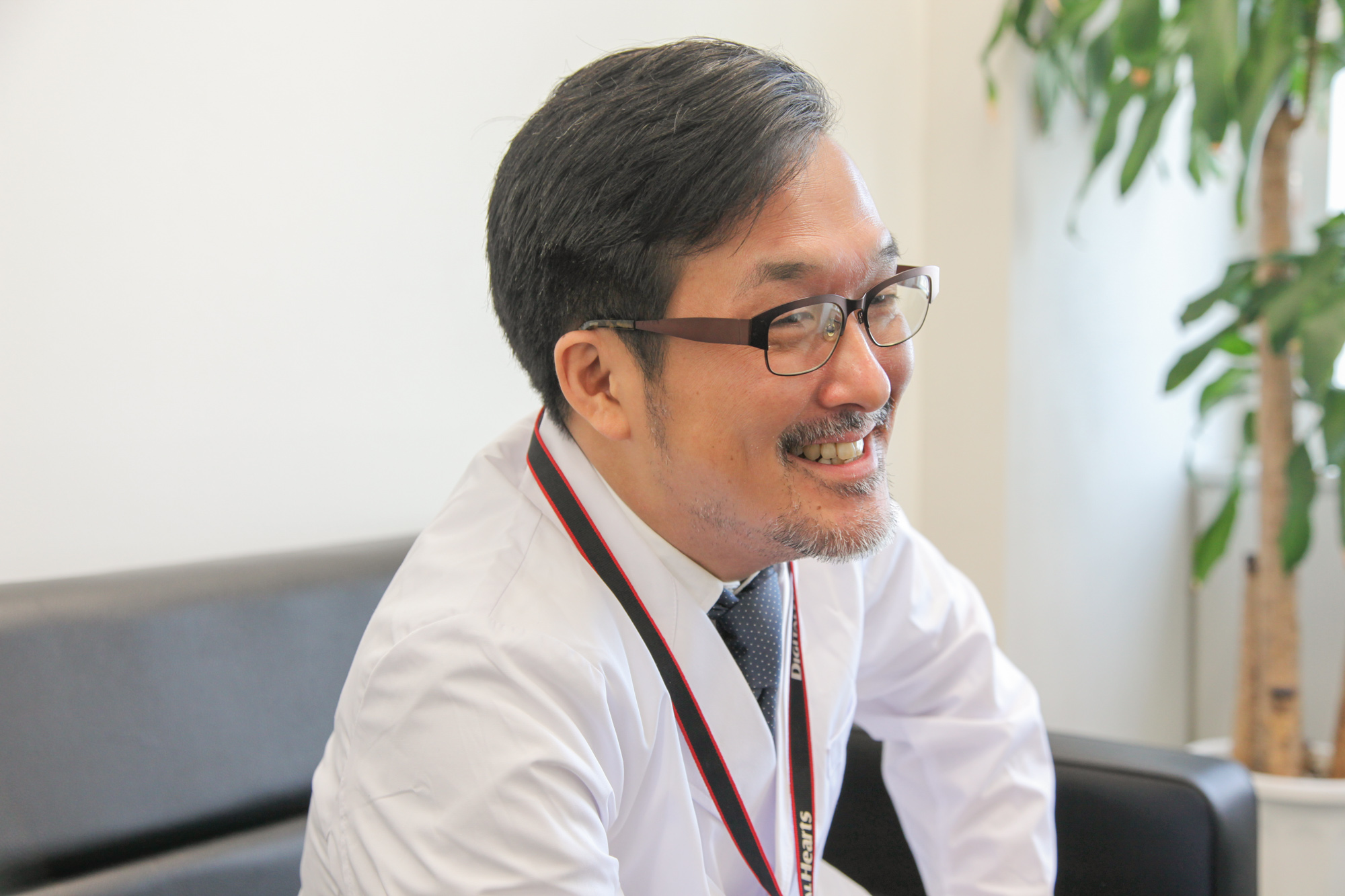 
――：Thank you for having us today. So could you please tell me about the process of developing this service and the summary of the service?

Even if you’re involved in the gaming industry, you may not know who the Digital Hearts is unless you’re related to the debug team, but we are involved in the development process of many game titles as the company who is specialized in debugging. Believe or not, we conducted debugging for many major titles you’ve seen.

It was beginning of 2016, we started getting offer to debug VR contents from manufacturers. The offer came in constantly, and they are not only for the games but also other contents. We’ve heard that this is going to be the year of VR, but our impression was “it happens earlier than we thought.”

Under these situations, we assumed that VR should become the new growing field after the smartphone, so that we quickly established the research team called “VR exclusive debugging team”, and we had focused to build the procedure for testing VR.

While we research, the first concern we confirmed was VR sickness. Experience of playing game with HMD gives you the visually induced perception which was incomparable with the sickness you’ve experienced with other existent devices, so we figured that providing some kind of solution against this sickness will be the way of contribution to the growth of VR.

――：That’s too bad, if you could get only a bad impression from such a great new experience.

That’s correct. I still remember how much I was excited when I put the HMD at the first time, and how impressed I was when I experienced VR world, so I hope VR to become popular as I’m also one of the VR fan.

As research in “VR sickness” has proceeded, the quality assurance service for VR “Scoring service of VR sickness” was born. It is the service to verify and scoring the level of VR sickness.
There are several different perspectives as to why the sickness occurs. Even many organizations have been researching and studying, the consequence doesn’t go beyond the hypothesis, and you can’t define the certain condition in general that causing the sickness.

Even if you set frame rate according to the spec from the manufacture, it is not assured that you won’t get the sickness, because it is a completely different matter.
In most of the case, you want to focus finding the solution of how to avoid the sickness, but we try to seek quantifying how much sickness you will get. 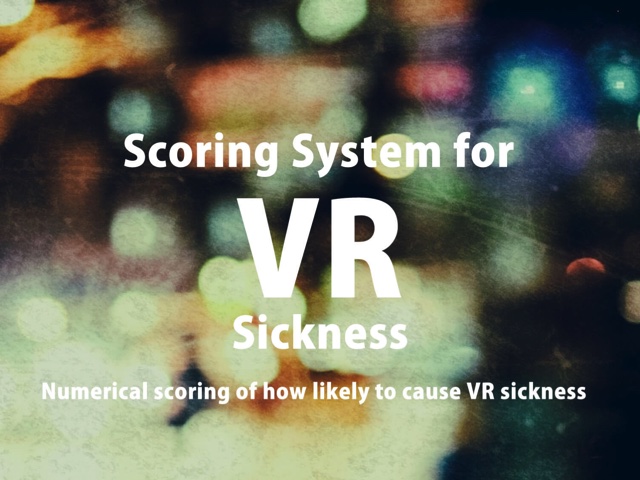 In order for you to understand our scoring service, I usually use to explain a speed meter and speed limit for the car. What if I say there is no speed meter on the car, the driver won’t be able to know how fast they are, how slow they are, and whether it is safe or not, because this is just a subjective judgment. Each person has  different criteria so that the result should be different even if they drive in the same speed.

In this case, speed limit can be the criteria. Is it around 60km/h for the regular road and 80km/h for the freeway? Again, these can be a criteria but it works only when the speed meter comes with. So, our “Scoring service of VR sickness” corresponds to the speed meter for this example.

――：How is the reaction from the manufactures after announcing the service?

The service itself was released on August 17. Since then, we’ve been introducing the service to the manufactures, and they are all very interested and many of them want to talk about the details, such as schedules, right away. Because the most concern for the manufacture is tolerance for VR sickness will be build.

This is good news for the user, but not for the manufacture. Because if whole team members, including the tester, develop the tolerance for the sickness on the game that you’re working on, and that throws you into the cycle to create the contents that could give the sickness easily, and at the same time, it become impossible to make an objective judgment. However, as long as you leave us to evaluate the sickness, we prepare fresh participants for that sickness and you can receive the result that you truly necessary , and also confirm the user’s reaction that you expect.


■We are definitely motion sickness buff.


――：Would you please tell me about your test procedure?

We use measurement procedures called SSQ（Simulator Sickness Questionnaire） which is a widely applied measurement tool in research studying visually induced motion perception. Categorize the sickness into 16 symptoms then rated by 4 stages. It looks like very easy survey sheets, but you have to be very prudent with the construction of testing environment, quantity of data, and handlings of data, so it is actually harder than you think and it requires expertise of unique aggregation method.

Utilizing SSQ enables to digitize the sickness. We have now 24 contents, 720 participants SSQ data, and we believe these are strong enough to delimitate the boundary precisely. We can show you exact score that you want to target, and provide the safety criteria that the content is appropriate for continuous use for the user without being influenced by the sickness in a scientific way.

In addition, unique point of this measurement procedure is that you will get score sort by 3 types of damage, which is causing vomiting, eye muscle strain, and losing sense of balance. By utilizing this feature, you are able to analyze the element causing sickness to a certain point.

Motion sickness is a kind of physiological symptoms for individual. But scoring by using externalized symptoms, some unknown sickness turns into more controllable sickness, and that is important. In order to do so, we are trying to seek to support the development by providing the service in the most efficient way. 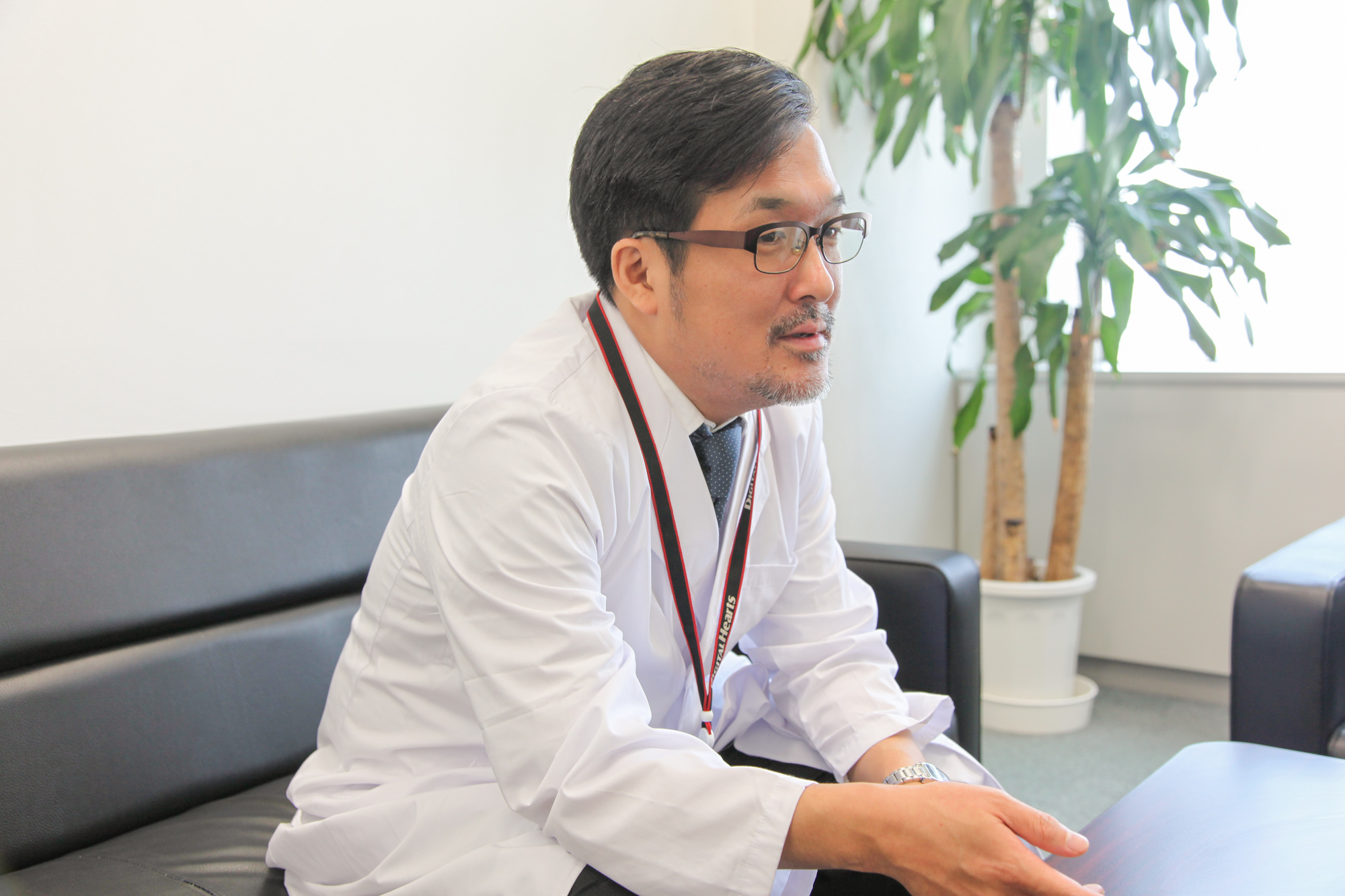 ――：What kind of tendency the actual service presents?

The higher the total score, the more exit rate of the game tends to be increased. The exit rates become 0% when the total score is lower than the certain level, and I would say it should be the safety level. The title C or F has a lower score but also the exit rate is high (see below chart), however, I guess it just because of attraction of the contents.

▲The result from the actual test
You can observe that the higher the score, the higher the exit rate
We also realize that a few participants get high score even if they performs the test with the contents which has not so many motions, because some people already has a potential to feel certain kind of sickness by just putting on the HMD. In some of the case, we’ve confirmed that you will get VR sickness easily if it is common for you to get motion sickness, and it resulted the score become twice as high. We’ve also confirmed that it is not influenced by age so much, or you may feel some differences depending of the platform even if you play the same contents. We don’t know the cause, but consequently, we just know this is the fact.
――：Would you please tell me about your future prospective and enthusiasm?
At the beginning, we didn’t even know how we are going to select the participant so we just kept conducting trial and error. Even the SSQ, it still makes us feel the difficulty to operate properly because of the route to obtain original data is very complicated, or the manual is only available in English. However, we overcame these difficulties to start the service and have reached to the point where we could establish the safety criteria. I don’t think it is right if the developer has to compromise to create their contents because of the motion sickness that is an uneasy feeling of the body. As a VR user, I would like to share the excitement of VR world with others, and as a VR team, we would like to help to provide the contents with high quality in cooperation with the developer who desires to create things even more excitement by utilizing the new technology. 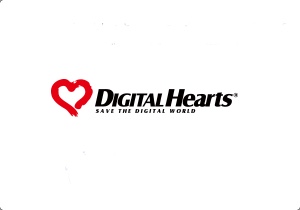